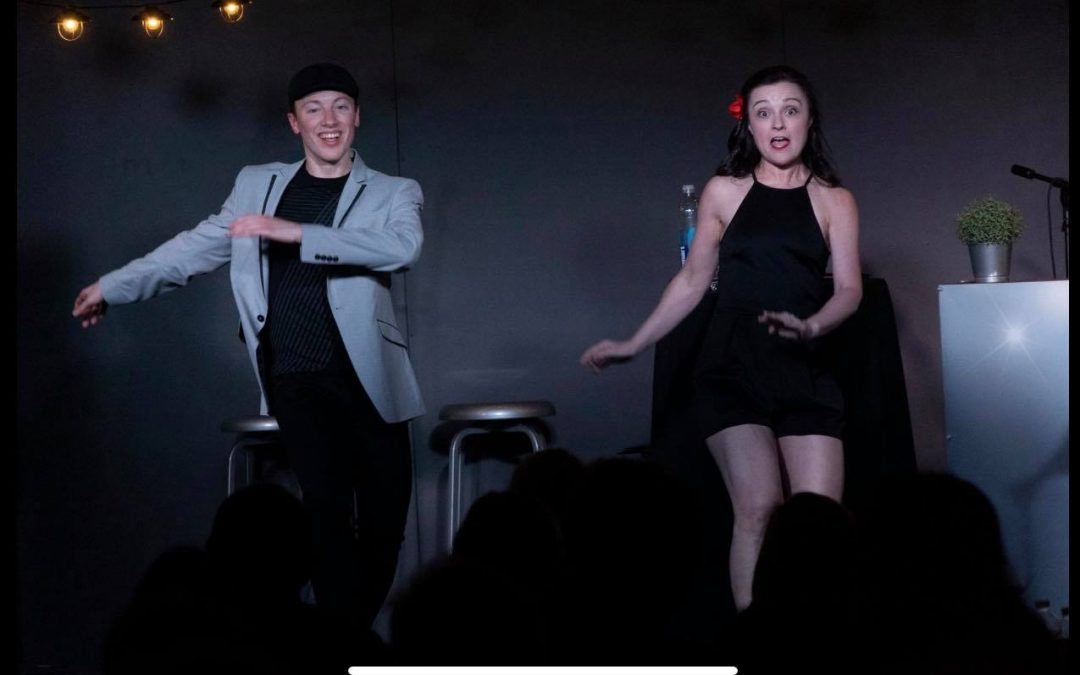 (INDIANAPOLIS) — After a year of show cancellations and darkened theatres due to the coronavirus pandemic, Klein & Alvarez Productions, LLC, under its Magic Thread Cabaret brand, is excited to provide stage time to a pair of homegrown artists for a special virtual show to celebrate Valentine’s Day. Friends and fellow New York theatre performers Cory Lingner and Melissa Schott will star in “La La Love,” presented on the mainstage and in association with Phoenix Theatre Cultural Centre, to be livestreamed on February 11 and available on demand February 12-14, 2021.

“I have missed the creative opportunity to present our shows to Indy audiences since the pandemic hit us last year,” said Artistic Director Dustin Klein. “I hope people will make an effort to buy an online ticket to support our newest endeavor, ‘La La Love.’ I have always loved the idea of a Valentine’s show and we are honored to have two of our past headliners joining up for some classic love songs. Cory Lingner and Melissa Schott both will provide much-needed heart, razzle-dazzle and joyful showmanship, with tap dancing and singing for you and your special someone.”

Lingner is eager to get back on stage after his Magic Thread Cabaret debut at The Cat in Carmel broke box-office records in the spring of 2019. “I’m so looking forward to this creative collaboration for many reasons,” Lingner said. “Getting the chance to perform in a safe environment since our industry has essentially been shut down and performing alongside my friend Melissa Schott, I’m just so thankful for this opportunity. I’m sure everyone who tunes in will have a great time.” A takeoff of the iconic, Academy Award-winning 2017 film, “La La Land,” the cabaret will feature plenty of lively and moving solo, duet and tap numbers from the talented pair, along with special guests. The lineup features some of history’s most beloved love songs, making for a perfect date night for Valentine’s Day, to be enjoyed live or on demand from home or anywhere. “While I’m going to miss performing in front of a live audience, knowing we are bringing this concert to people around the world is very special,” said Schott, adding, “I’m just so excited to be back on stage!”

“La La Love”
Livestream on Thursday, February 11 at 8:00 p.m.
Tickets for the livestream are $20. The show will be available on demand February 12,13 and 14 for $25. Buy tickets at magicthreadcabaret.com or phoenixtheatre.org. Melissa Schott grew up in New Palestine, Indiana and is an accomplished actor, singer, dancer and choreographer. Prior to the pandemic, she enjoyed portraying the infamous Mae Clarke in the pre-Broadway production of “Cagney the Musical” at Pioneer Theatre Company in Salt Lake City. She was also a featured dancer for Randy Skinner in “Make the Season Bright” at the Beacon Theatre in New York. Other past credits include “42nd Street” at Ogunquit Playhouse in Maine, “Thoroughly Modern Millie” at Riverside Theatre in Vero Beach, Florida, and Cirque du Soleil’s touring show “Banana Shpeel.” Schott was invited to perform as a featured soloist at the Adrienne Arsht Center’s 11th Annual Gala, “A Celebration of Women in the Arts,” alongside Chita Rivera, Rita Moreno, Gloria Estefan, and Vanessa Williams. Quickly thereafter, she was invited to be a featured soloist at Carnegie Hall’s Medal of Excellence Gala honoring Adrienne Arsht at The Plaza Hotel. Through her symphony concert work, she has been a featured soloist across the U.S. and Canada in the symphony pops concert, “Classic FM,” with Maestro Jack Everly. She is a choreographer and tap-dance instructor in New York, where she lives with her husband Aaron and their Yorkie family. For a full bio, visit her website at melissaschott.com. Cory Lingner grew up in Indianapolis, where he started dancing at age four and later on stage at Carmel’s University High School, before graduating in 2009. He went on to earn a degree in musical theatre performance from the prestigious Weitzenhoffer School of Musical Theatre at University of Oklahoma. Based in New York, his Broadway credits include “Carousel,” “Charlie and the Chocolate Factory,” “An American in Paris,” and “On the Town.” He was cast as The Jester in the Off-Broadway revival of “Once Upon A Mattress,” which earned him an Astaire Award nomination. On TV, Lingner has appeared on Saturday Night Live, Tony Awards, Today Show, Macy’s Thanksgiving Day Parade and Hulu’s “The Battery’s Down.”

Dustin Klein and Tom Alvarez founded Klein & Alvarez Productions, LLC in 2015. Two years later, they debuted Magic Thread Cabaret with the mission of “Connecting Songs to the Soul” via the intimate and urbane cabaret art form by providing practical financial support, promotion and exposure for the artists who bring it to life on stage. The nonprofit series is fiscally sponsored by Fractured Atlas, the New York-based nonprofit technology company that provides business tools for artists. Past highlights include selling out houses at The Cat in Carmel for “Cory Lingner: Just a ‘Dancer,’” exceeding the box-office record they previously set with “Katy Gentry: Judy Garland LIVE!” Klein and Alvarez’s partnership began when they produced the best-selling show of IndyFringe Festival 2016, “Calder, The Musical.” They turned that workshop presentation into a full-length musical in January 2017 and are currently working to present the show in other markets. For more highlights, reviews and news, visit magicthreadcabaret.com.